Posted on August 4, 2012 by captaincliff 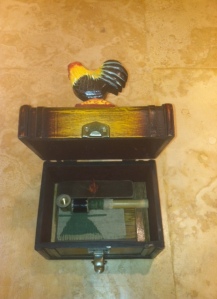 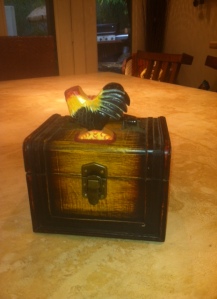 Once upon a time well before there was a video game called Angry Birds, there was a headless chicken named Mike. That’s right, he had no head. If you care to get technical, he did have a partial brain stem and one ear. I suppose you might want to know how Mike lost his head, something most of us believe is pretty essential and usually required for maintaining a healthy lifestyle. In fact, Mike proved them all wrong and did just fine without his fine feathered head and prominent beak.

I will try to be brief even tho Mike, later dubbed “Miracle Mike the Headless Chicken” and his life story (see video link below) present us with a number of profound lessons and philosophical considerations. Mike’s owner was a nice guy chicken farmer in Colorado in the 1940’s. Just because you raise chickens and cut their heads off on a daily basis doesn’t make you a bad guy. Keep that in mind. Maybe that’s the first life lesson. Anyway, one day this chicken farmer, whose name was Lloyd Olson, cut the heads off a bunch of his chickens with an axe. Remember he did this for a living to sell the chickens parts to people who wanted to cook them for dinner, not just to be a crazy lunatic with an axe or because he held a grudge against helpless fowl. Regardless, one of the chickens got back up after losing his head and kept walking around acting relatively normal. Dont ask me what “normal” is in that situation because being beheaded is not really something most of us count as a common occurrence. You may already know that some animals can respond rather reflexively even after losing their head. Hence the term, “running around like a chicken with his head cut off”. The strange thing is that usually those chickens run around headless for a minute or two and then, realizing that life is rather limited without a head they keel over and die.  Well, good old Mike didn’t do that. He just kept walking around while trying to peck the ground and talking like a more “complete” chicken. Of course talking without a head is rather  different and sounds more like a raspy gurgle than a “cock a doodle doo”. Regardless, it  became obvious that Mike was a very unusual chicken who didnt seem to care that he lost his head.

Soon enough Lloyd decided to call his special chicken Mike the Miracle Chicken. He wanted other people to know about Mike and his unique situation. Of course back then just like today if you wanted to grab people’s attention for marketing and promotional purposes you would need to emphasize the part about Mike being devoid of a head. This was well before the advent of social media and web search engines with their various SERPs, SEMs, and SEOs for generating increased visibility and internet “traffic”. This was just a simple farmer out in the middle of nowhere Colorado with a very alert and active headless chicken. Of course he wanted to make money off of Mike. Who wouldn’t?

Can you guess what happened? Mike was sent on a grueling world wide promotional tour by Hope Wade, a very enterprising “promoter” and circus style booking agent. Mike the Miracle Chicken starred in shows from California to New York and even sailed to Europe once! Apparently even snobby French and English people were interested in seeing a chicken without a head who acted relatively normal. By this time in the story (sorry about me saying I’d be brief) most people want to know how Mike managed to feed himself or be fed since it usually helps to have a mouth. In fact, Mike actually GAINED weight on his fancy world tour and went from being a scrawny two pound chicken to weighing almost eight, which is a pretty hefty sized Butterball. It seems that Mike could be fed by using a eye dropper and pouring chicken feed down his open esophagus using certain simple tools. The technique must have been pretty successful since Mike actually got fat. Perhaps having a head slows us down from eating too much since we typically use our eyes and nose to tell our brains when we are starting to get full. Poor Mike had none of the above and his handlers pretty much saw him as the “Golden Goose” , so they often kept him “topped off”, so to speak.

Let me get to the point. Maybe you already figured out the rest of the story for yourself. For over a year they shlepped that plucky headless chicken around to sideshows, carnivals and store openings. People around Mike ( maybe somewhat like the folks around Michael Jackson) became too complacent, forgetful and lazy. One night in their motel room Mike the Miracle Chicken started to “gag”, either because he had gained too much weight or because it’s harder to breath without a head, but his handlers had forgotten the eyedropper and their other feeding equipment at the sideshow. Maybe they were too busy counting their Mike the Golden Goose chicken profits. Poor Mike choked to death which I’m almost 100% sure was NOT the origin of the phrase “to choke ones chicken”. If you dont believe this story then watch the video below or look up “Mike the Miracle Chicken” on Wikipedia.

There is much to be learned from this absolutely true story and real life parable about a unique “gift horse” (or gift chicken). We can admire Mike’s unusual lust for life and sheer tenacity. Personally, I wonder if he ever achieved the Zen Buddhist objective of “grasping emptiness with an empty mind”. No doubt he got close and losing his head may well have helped.