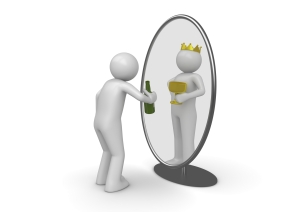 What would you do if you happened to have an identical twin that you didnt particularly like and had trouble getting along with? How about if you were one of two conjoined (siamese) twins who had completely different tastes, preferences and personalities? Seems impossible to even imagine, right?

Well, I have no twin and, as far as I know, nobody else is connected to me by the hip or head. However, I do seem to have a part of me IN my head that is often at odds with the rest of me, at least the me I tend to normally consider as….well, me. This is obviously starting to sound schizophenic, so let me skip to the main point. To be honest, I consider myself to be a fairly narcissistic person. I know I’m not Donald Trump and I dont have psychotic or serial killer tendencies like say Charles Manson or Ted Bundy. I just mean that like Yogi Bear and others with self-centered tendencies and narcissistic features I tend to secretly consider myself to be smarter and more important then the average bear. At times I catch myself thinking that the world is my personal oyster/Jellystone Park and I deserve (or am entitled) to sample all of the picnic baskets. Dont worry, I dont steal or rob, mostly because I would be absolutely mortified to be caught and later seen on Court TV in an ill fitting orange jumpsuit. True to Jodi Arias/Casey Anthony-like form, however, I would worry about how good I looked in my mug shot and would want the cops to make sure they got my “better side”…if I have one.  See, that’s the thing. My kind of narcissism is mostly about wanting positive recognition, fame and fortune.

Most of my childhood fantasies were about being a famous astronaut, daring explorer or superhero who swoops in and saves the day like Zorro, Superman or Mighty Mouse. Actually the Zorro thing is no good because he never gets recognized due to his signature black mask. I mean, who is Zorro without his face mask anyway? Just some random dude who is good with a sword and can make that cool Z motion with it. I practiced that signature Z fencing move diligently as a kid and never really got it down. It was too hard. Also, the astronaut fantasy got nixed in childhood the first time I ever went on a roller coaster. I get motion sickness extremely easily (like say standing on a fishing pier) and as a result going into outer space, flying through the air, discovering the New World like Christopher Columbus, sailing the ocean blue in search of pirate treasure or even riding in the back seat of a station wagon on a family vacation were near impossible tasks. No doubt such a weak stomach would have severely hampered any self respecting hero, super or otherwise. I guess you could say I lack the requisite “skill set” and it kind of took the wind out of CaptCliff’s self-centered fantasy sails, so to speak. Now that we’re being totally honest, I’m also somewhat afraid of horses so the whole macho cowboy thing isn’t likely to happen anytime soon. I guess I’m more of a Chuckwagon kind of guy since I can and do enjoy rustling up and consuming a Hungry Man-sized breakfast of Texas toast with bacon, scrambled eggs and coffee, all without getting the least bit nauseous.

Maybe I’m giving you the impression that I’m all wimp and no wonderful. I’m just saying that the part of my personality that wants to be seen on the news for saving the world and rescuing damsels in distress collides and conflicts with some of my other constitutional deficiencies. Another problem is that I am not nearly as socially outgoing, energetic and “man about town” as the average debonaire world renowned extroverted playboy narcissist would need to be. Picture if you will James Bond, Richard Branson, or any other supremely confident run-of-the-mill billionaire or secret agent. They work hard and play even harder. I’m really kind of lazy. For example, I am typing this article on my bed in my boxer shorts.  I havent shaved in three days, and I think I’m out of clean socks, pants and shirts. That doesn’t seem like something Donald Trump or Hugh Hefner would normally do or be prone toward having to deal with. I do resemble the Playboy founder in at least one way since we both walk around the house alot in our bathrobes. Unfortunately, his is black satin and mine is white terry cloth with coffee stains as well as bread crumbs from my Texas toast bacon and egg breakfast. Do you see what I mean? Part of me wishes to be John Glenn and another part is more Wally Cox in The Reluctant Astronaut or Mr. Limpet. The two parts dont exactly fit together in a nice neat self-concept.

You probably need a bottomline by now. Bottomline: The result of the aforementioned is a kind of inner struggle reminiscent of the Chinese Siamese twins Chang and Eng who were said to be nothing like one another not to mention fed up with being attached at the hip, literally. Popular wisdom suggests the best solution to opposite extremes is a dialectic, which in layman’s terms means something that transcends and reconciles the stark differences. What reconciles the differences between John Glenn and Mr. Limpet?? The only thing I can think of is self-acceptance and a pretty strong sense of humor.  I guess I have the latter but I’m still working on the former. Fact: Did you know Chang and Eng married a pair of sisters and had 21 kids between them? Of course their wives, the two sisters never got along and ended up living apart. Goes to show you you cant have everything, even if you are a closet narcissist who is stuck with yourself . Arrgh!