Claire Mazer and the Talking Unicorn 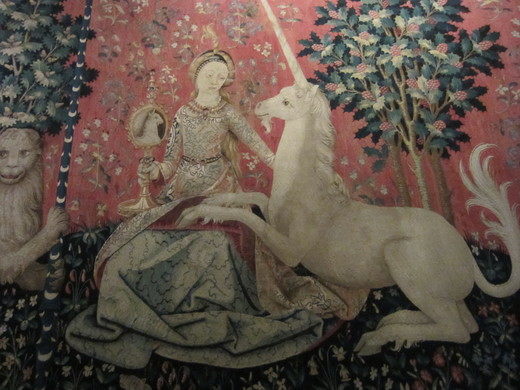 by Cliff Mazer, Ph.D., aka CaptCliff

We live in what’s now called a quantum universe. While that means nothing to most people, to others it denotes something extremely complex and exciting ( typically folks with large brains who enjoy listening to Neil Degrasse Tyson and watching The Big Bang Theory). The rest of us bird-brain types whose lives and grey matter toil towards the middle of the bell-shaped curve have to try extra hard to grasp the significance of quantum mechanics.

Quantum theory postulates (theoretically) that there are endless number of “realities” and endless dimensions of probabilistic possibility where infinite versions of ourselves exist in space/time unseen by one another. The people we think we are (like the guy Cliff writing this blog) are only one version of us based on the unique ways our thoughts, feelings, beliefs and experiences have shaped (and been shaped) by our sensory perceptions. In so doing, we continually reinforce what we believe we see, smell, touch, hear, etc.  In other words, most things are “real”, “believable” and “concrete” to us only because we have convinced ourselves of it based on repeated interactions and multi-sensory experiences as well as what is sometimes called “consensual reality” (what others see and together we all choose to believe). This includes simple things like believing that that thing over there is a “chair” or that I just brushed my teeth with what we all probably agree is a “toothbrush”. However, if there was somebody here who had never ever heard of or seen a toothbrush or chair or anything at all like it, he wouldn’t immediately know what those things were and very likely wouldn’t even “understand” or be able to process what he thought he saw  if we showed him those exact objects. Even more remarkable (besides his really bad breath from having not yet discovered toothbrushes or toothpaste) the objects we show him that we take for granted to be chairs and toothbrushes might appear completely different or nonsensical to his innocent eyes and unfamiliar optical lens. In other words those objects might look nothing like what we normally see when we look at a chair or a toothbrush. It’s a tad bit like doing psychedelic drugs like LSD which mess with our brain and chemical receptors just enough to give us a glimpse of what its like to see the world in a vastly different way based on what we know and don’t know already. One advantage to getting glimpses of such “non-ordinary” or altered reality is that it reminds us just how “soft” and malleable so-called “reality” really is.      Of course if you are a very scared, close-minded or rigid person and need the world to be “solid”, “fixed, and familiar” then taking such a drug would probably freak you out or it might just give you a bad headache and nothing else because your brain would use “fuzzy logic” to keep “resetting” things back to what it’s used to seeing and believing.  I imagine if my dad, Robert Mazer, a chemical engineer by trade and training took LSD he would probably just get a slight headache and some indigestion, pop a few Tums and go to bed…and not notice the TALKING UNICORN in his closet that had a number of illuminating and esoteric ideas to discuss with him about his mother, his childhood experiences in Milwaukee Wisconsin, and possibly God and the entire Cosmos. I might be wrong about that speculation. It’s just a guess just like it’s my hunch that my mother Claire Mazer (especially if she was still young and vibrant and not the old lady version with multiple hip replacements, painful osteoarthritis, severe bipolar illness and dementia) after taking LSD would begin noticing some interesting changes occurring to the various Native American paintings on the walls of her condo in Longboat Key Florida and about an hour or so later might be seen riding down to the beach on a talking unicorn without any clothes on. I might be wrong about that too but it’s what some would call an educated guess.

The other day was my mother’s Yahrzeit. She passed away on August 10, 2016.  It’s been a long tough year for me since she died and I don’t think I’ve thought about her or allowed myself to truly feel the significance of her passing nearly enough. Maybe if I did I would have avoided some of the pointless pitfalls and maddening misfortunes that followed not long after I became a card carrying member of the “Both My Parents are Gone” club. Some of the “stories” we tell ourselves and carry as our “absolute reality” based on past experience and what we think we saw, heard or interpreted in a certain way probably need to be reconsidered or even changed. Like our computers and cellphones, our mental programs require ongoing updates and pragmatic “patches” that allow for uncertainty and continued growth. It’s generally not a good idea to become too rigid, too certain or too “absolute” about anything, especially in a quantum world. Luckily there will be “billions and billions” of other Carl Sagan like opportunities to get it right based on quantum probability, serendipity, and the human capacity to see past our ego-based illusions. I say this both for myself and for all the CaptCliff permutations in infinite dimensions who like me are probably stumbling around the multiverse doing many of the same dumb things I tend to do like putting my t-shirt on backwards (again), losing my car keys (look in your hand dummy) and having single socks disappear into some dark matter/black hole located directly behind the laundry room dryer… again and again and again.

Mom, I hope you had a fun ride on the TALKING UNICORN and please do enjoy the lunar eclipse next week and the Perseid meteor shower tonight and tomorrow. They say it’s going to be absolutely heavenly.   Love, Cliff

The symbolic meaning of The Unicorn is all about Opening up to Infinite Possibilities and that infinite possibilities surround you and are available to you at all times.  Many times we cannot see that possibilities abound, or even exist. Unicorn gives us the “eyes to see” those hidden possibilities, and “the wisdom” to take advantage of them.

Spiritually the Unicorn symbolizes success. If you summon the power of the Unicorn, the Unicorn will give you the blessings to be a success in whatever you choose to pursue.

Unicorn is the symbol of the most magical of all animals! The Unicorn can shift between the visible world and the invisible world easily like walking from the shore of a beach, into the sea for a refreshing swim, and back to the shore to sun itself on the sand.

The ancient myth and lore of the Unicorn speaks of original innocence, purity, grace and mystical healing powers.  To touch or be touched by the horn of the Unicorn can bring total and complete healing.  The healing of the Unicorn brings everything in mind, body and soul into renewed perfect balance.

Unicorn brings the gifts of:
all possibilities, wisdom, and the clever pursuit of dreams
Unicorn totem brings the magic of:
Magical Manifestation, Summoning of Dreams, Calling Upon The Universe For All Answers
Unicorn spirit animal brings the energies of:
transmutation  (passing through of boundaries ), spiritual sight ( to see past all ego based illusions, until the deep truth is revealed ), manifestation ( to bring all that you imagine into reality )

.
The Musée de Cluny, also known as the Musée national du Moyen Âge, is housed in one of the oldest buildings in Paris, a former townhouse whose construction started in 1334. Yet beneath it is something even older: the ruins of Gallo-Roman thermal baths believed to have been used by 3rd-century boatmen.
.
Inside the museum is a vast presentation of medieval life through sculptures, furnishings, stained glass, and manuscripts. The most significant objects are a group of Middle Ages tapestries known as “The Lady and the Unicorn.” Woven from wool and silk, five of the tapestries fixate on the five human senses, with a woman interacting with a unicorn, as well as a lion and sometimes a monkey. For example, in the “sight” related tapestry she holds up a mirror to the unicorn which looks at its gaze, possibly admiring its beautiful reflection. In “touch” she has her hand on the unicorn’s horn.
.
The sixth tapestry remains more of a mystery with its text ”À Mon Seul Désir” (“To my only desire”) interpreted most frequently as a personal declaration of independence or purity. No matter the meaning, it’s hard to escape the charms of the strangely captivating unicorn as it confidently poses through the scenes.

2 Responses to Claire Mazer and the Talking Unicorn